Braga is a likeable city with a lot for tourists to see and discover. Within the city, there are charming plazas, grand churches and a traditional Portuguese character. Just outside of Braga is the Bom Jesus do Monte, which is regarded as one of the finest tourist attractions of northern Portugal.

Connecting Porto and Braga is a regular and inexpensive railway, and this makes Braga easy to visit as an independent day trip. This article will detail how to travel from Porto to Braga, and includes timetables, station information and fare details. The final section details how to travel from Porto airport to Braga.
Related articles: Braga introduction – Day trip to Braga (with map) – Day trips from Porto 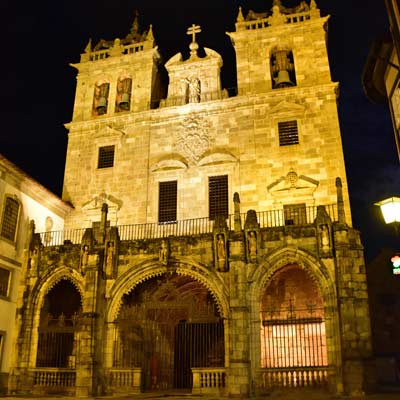 The Se cathedral, is one of the oldest churches in Portugal and dates from the 11th century 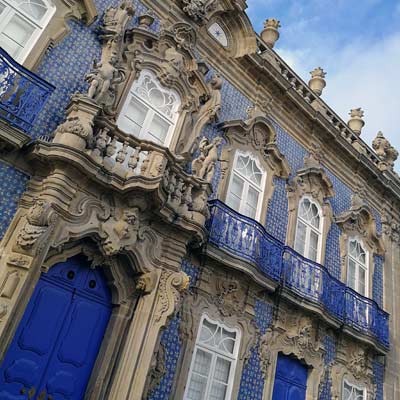 The extravagate Palácio do Raio in the centre of Braga

Porto to Braga an overview

Braga is 42km to the north of Porto and can be reached by train or bus; however, the train is the recommended means of travel. The train runs a frequent, comfortable and direct service, and is also cheaper than the bus.

The São Bento train station, from which the Braga train departs, is conveniently located in the centre of the city, close to the popular tourist districts.

The train service is operated by Comboios de Portugal (CP), the national train company of Portugal. 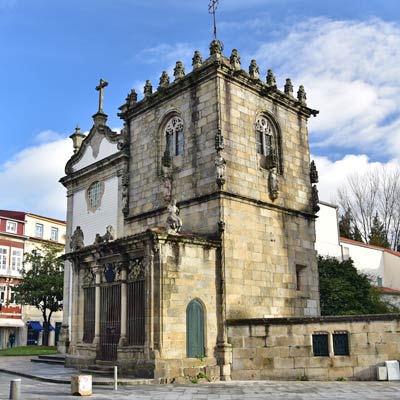 Braga is known as the religious centre of Portugal, and is impart due to the sheer number of churches within the historic centre

The Porto-Braga railway is part of the urban Porto train network, which unfortunately means that there are many stops. The journey takes between 54min and 71min (depending on the service) and the route is not that interesting, passing through non-descript towns and countryside.
Advice: A rental car is useful for a day trip to Braga, as eliminates the need to catch the bus to the Bom Jesus church, and the Sameiro Sanctuary can also be added.

Porto to Braga fares and tickets

A single ticket from Porto to Braga costs €3.25/€1.65 (adult/child), a return ticket is the price of two singles €6.50/€3.30 (adult/child). The journey distance falls within “Zone 8” pricing bracket of the Porto urban train lines, and for a detailed fare guide, please see the CP website:
https://www.cp.pt/StaticFiles/Passageiros/1_horarios/precos/pt/oporto-urban-trains-prices.pdf

(link opens a PDF, which may download on certain mobile phones) 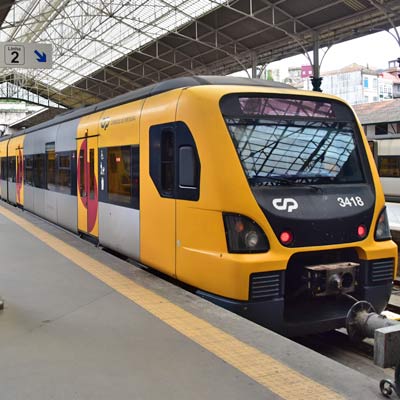 The train to Braga waiting in the Sao Bento train station 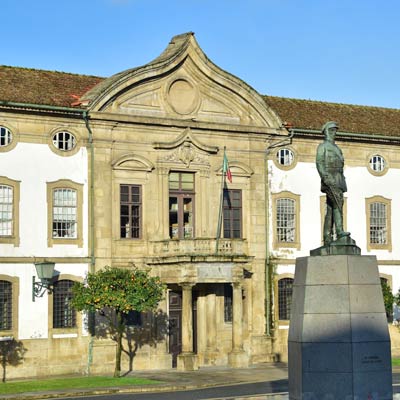 The Convento do Pópulo and the statue of Gomes da Costa, the 10th president of Portugal, but who only led the country for 22 days in 1927

Braga is the final station on the railway line, and depending on the service takes between 54min and 71min. There are twenty daily departures, with seven extra services Monday to Friday. The first daily departure from Porto is at 6:45 (or 6:15 Mon-Fri) and the last return services from Braga is at 23:32 (correct Sept 2019). For the latest timetable, please see the CP website:
https://www.cp.pt/StaticFiles/timetables/oporto-braga-urban-trains.pdf
(link opens a PDF, which may download on certain mobile phones)

Have you considered a group tour of Braga?

Small group tours are an enjoyable and informative way to discover Braga, along with providing a chance to meet fellow travellers. Since the introduction of rating and reviews, the standard of group tours in Portugal has dramatically improved. Now tours are led by enthusiastic and knowledgeable guides, and cater for modern and worldly tourists.
We have worked with GetYourGuide.com for the previous six years and some of their best tours they offer for Braga include:

The trains that operate between Porto and Braga and are modern, clean and well maintained. The route is also safe to travel late at night. The Braga train is also suitable for less mobile passengers, as the platforms are at the same height as the carriage doors. 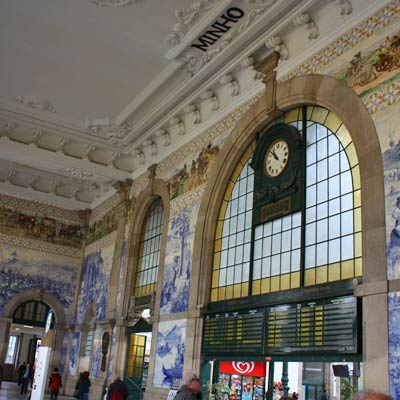 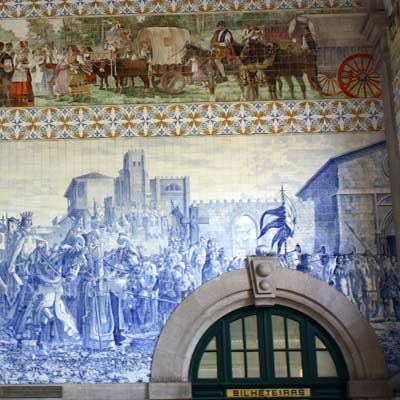 The tile paintings date from 1907-1913 and reflect the eras before and after the 1910 revolution. The classic blue and white tiles where before the revolution, while the coloured tiles were considered a modern and progressive style and suitable for the newly formed republic in 1911.

Tickets are purchased from the ticket office or ticket machines. The ticket machines provide instructions in all common European languages and accept cash or card. The main ticket office in São Bento train station can get very busy, especially at rush hour.
Warning: Tickets must be purchased and validated before boarding the train; passengers should expect to get their tickets inspected, and fines are given for invalid (or non-validated) tickets.

Trains to Braga all depart from the São Bento train station (Estação de São Bento). This station is conveniently located close to the main tourist areas of Porto and is a short walk away from the Ribeira district. São Bento is served by the D metro line (yellow line), which is the main north-south metro line.

The station is well equipped with standard facilities, including; an ATM, coffee shop, luggage lockers, ticket offices and a small waiting room. Visitors should also leave time to marvel at the elaborate tiling that adorns the station interior.

All trains to Braga also stop at Campanhã train station. This is the main intercity train station of Porto, with direct services to Coimbra and Lisbon. The São Bento Station is closer to central Porto than Campanhã, so it is recommended to join the service at São Bento. 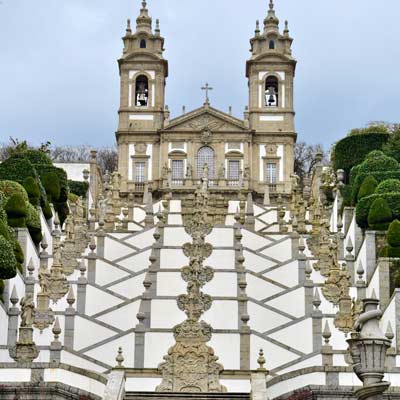 If you are travelling to Braga from Porto airport there is no need to travel into central Porto and then catch the train, as there is a direct bus service operated by “Get Bus”. A single from the airport to Braga costs €8 and the journey takes 50 minutes. The bus departs from outside of the terminal building at the “Stop A”, and cash tickets can be purchased from the driver.

There are eight daily departures and eleven Monday to Friday. The number of bus departures is limited but it is much better than taking an expensive taxi (€80-100) and more convenient than catching the metro to Porto and train to Braga. For the latest timetable and to purchase tickets please see the Get Bus website:
https://www.getbus.eu/pt/braga-aeroporto-braga/
In Braga the Get Bus terminates in the bus station, which is to the north of the city centre (GPs: 41.555632, -8.425312)

The Best Guide to Guimarães